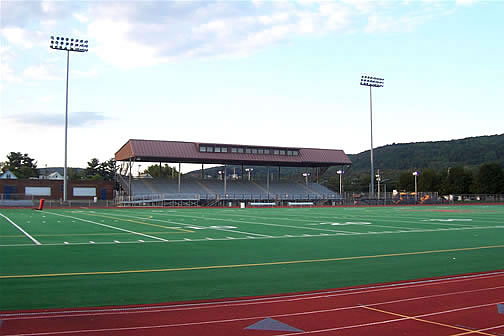 The Hornell Red Raider Football Stadium is located next to the High School (134 Seneca Street, Hornell, NY). Home games are played under the lights on an artificial surface. The stadium provides a covered grandstand on the home side and additional seating for guests wishing to sit behind their home team. The concession stand and restrooms can be found next to the grandstand. The main parking area is available behind the high school (off Route 36). Limited parking is available at the side of the High School (State Street) and along side the stadium (Adsit Street). The stadium opened in 1989. The field and track were resurfaced in 2000. Prior to 1989, football was played in the current baseball field. In addition to high school football games, the stadium is host to many other events including Hornell High School soccer, High School Home Track Meets and the annual Hornell Invitational Track Meet, youth football and soccer programs, and Hornell's annual Drum and Bugle Corp.

Directions to Hornell High School and Football Stadium:
From West take Route 17/I86 east to the Hornell exit (#34), turn right on Route 36 south, past Wegmans/Wal-Mart Plaza. Stadium on your left.

From South take Route 36 north out of Canisteo, NY, to Hornell. Proceed on 36 through town, past Main Street. Stadium on your right.

From North take Route 36 south past Route 17/I86 interchange, continue past Wegmans/Wal-Mart Plaza. Stadium on your left.