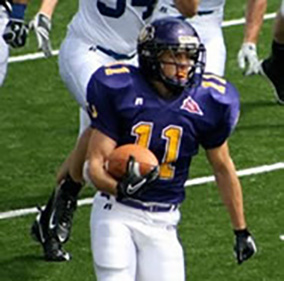 November 6, 2010 - Austin Dwyer ran for a career-high 273 yards on 29 carries, with one touchdown over Ithaca Saturday that gave AU the conference title and a berth in the NCAA championship tournament. The 273 yards were the second-highest for a single game in AU history and pushed Dwyer over the 1,000-yard mark for the season. He leads the Empire 8 Conference in rushing. It marks the second time this year Dwyer has been named Empire 8 Offensive Player of the Week; he also earned the honor after a Sept. 25 win at Springfield, when he ran for 168 yards on 22 carries. Dwyer was named Empire 8 Conference Rookie of the Year and finished his freshman season setting a new single-season record at Alfred University with 1,412. The former record was 1,406 yards set in 2007. Alfred University Saxons season ended with an appearance in the NCAA Division III East Region Final vs. second ranked Mt. Union on December 4, 2010. See more about Alfred University Saxons >> 2011: Played in 11 games and led the team in rushing with 980 yards a team-high 191 carries, with nine rushing touchdowns. His 67-yard run against Hartwick was the longest run from scrimmage by an AU player in 2011…Caught 15 passes for 87 yards and returned 21 kick-offs for 478 yards and a touchdown (85 yards, vs. Utica)…Was named a First Team Empire 8 all-star as a tailback and a Second Team pick as a return man. 2012: Played in seven games. Gained 296 yards on 65 carries and scored two touchdowns. Caught seven passes for 40 yards. Returned six kickoffs for 111 yards. Recorded a tackle. Prior to AU he helped lead the Hornell Red Raiders to their first State Championship Title in 2009. Austin was the 2009 New York State Class B Player of Year, AGR Player of the Year, State Finals MVP and Section V single-season rushing record with 2,836 at Hornell High School.
Section V All-Time Most Yards Rushing Season-2,826 Yards
Seven (7) 200+ Yard Rushing Games In One Season
Yards Rushing for Career-4391 on 547 Carries 2007-2009
Most Yards Rushing in One Game-399 on 35 Carries 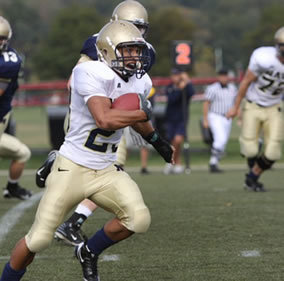 Zapata rushed for 1691 yards and 21 touchdowns his senior year. He finished with 81 touchdowns and 6101 yards as a Red Raider. Sixth place all time in rushing yards and seventh place all time for scoring in the state of New York. Zapata was a first-team All-State selection at running back as a sophomore and junior, rushing for 5820 yards and 77 touchdowns combined. He is currently the ninth all time leading rusher over his career in New York State history. Section V All-Time Rushing Record - 6,101 Yards Section V All-Time Scoring Record - 507 Section V All-Time Touchdown Record - 81 May 15, 2009, Congratulations Dave Zapata ('08 HHS Grad) on graduating at the Naval Academy Prep School (NAPS). David was named MVP of the 2008 NAPS football team. David graduated from the U.S. Naval Academy, May 2013 and was selected as an officer into the prestigous community of Surface Warfare. Congratulations David! 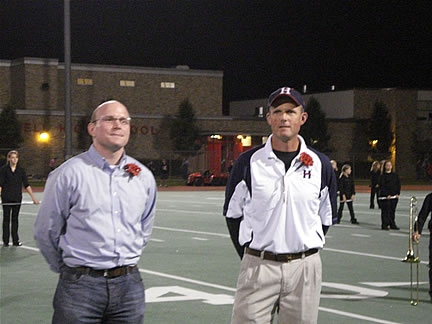 Brian played and started on all four years on the varsity football (and basketball) teams and was a member of the 1997 Section V Class B Champion Red Raiders. He earned a number of awards in both basketball and football. Awards in football included three conference all-star selections, 1997 Section V Class B MVP, 2nd team spot on the All-NYS team. He also set the school record for most passing yards in a season. Following graduation in Hornell, Brian attended Ithaca College and broke the passing record for the Ithaca Bombers. Mike served as JV football coach at Hornell High School from 1984 through 1990, and again from 1998 through 2006. His teams include four undefeated teams. He was an integral part of the Section V varsity titles in 1987, 1988, 2004 and 2005. Mike remains active with the Red Raider football program and is a Hornell businessman and community leader. Following graduation in Hornell, Mike attended Bucknell University. He and his wife, Sharon, also a Bucknell Alum, continue to follow Bucknell sports where their three children, Sandy, Laura and Eric attended. Eric, a 2007 Hornell grad and also a member of the Hornell Football team, is in his Freshman year at Bucknell. 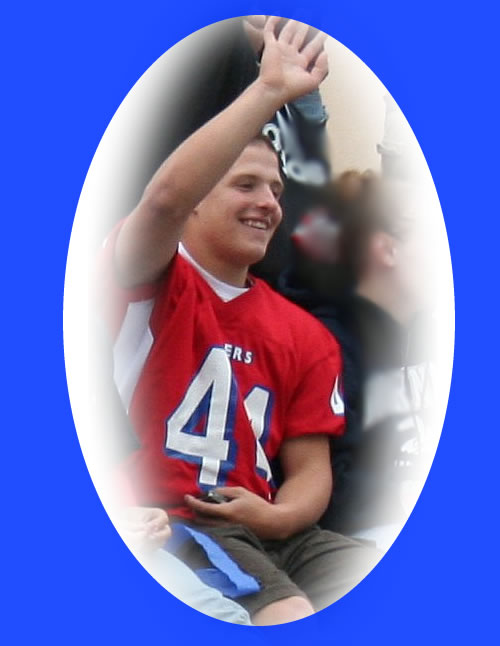 Always in our Memories Forever in our Hearts October 28, 2008